The General Synopsis At Midnight kicked off when Gordon Snell presented me with the inaugural Maeve Binchy Travel award in UCD’s Newman House on May 27th 2014. 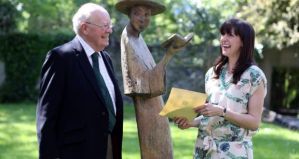 And look, here we are. I think the chap standing between us is a pickpocket. Since then, I visited the 31 Sea Areas of the Shipping Forecast by land, water and air and – in the case of those I explored through their folklore or history – by making things up. And now, six months later, it’s time to put the map away and listen to Sailing By, the music by Ronald Binge that accompanies the 0048 broadcast. (Have a listen, but be warned: it’s hypnotic.) If you’re new to this project, then the easiest thing is to back to the beginning and work your way forward. It’s a blog, not Serial – I know, right? as Sarah Koenig might say, like, right? – it doesn’t really matter if you read them in the wrong order, but it would make more sense to start here, Counting Down To Midnight.

Among other highlights, I’ve curled up – literally – in a curved bunk high in the Fastnet Rock lighthouse and nodded off while watching its six-tonne lamp flash 50 kilometres into the dark night. In a heatwave I tootled around the Isles of Scilly, where in 1707 Admiral Sir Cloudsely Shovell lost his fleet of four ships to the rocks because he couldn’t understand what direction they were heading. (Unlucky for him, yet a happy ending for the rest of us because the Board of Longitude was established as a result.) I’ve sat next to Craig Snell, a Maritime Forecaster in the UK Met Office, while he explained how he writes a Forecast. I’ve got lost – many times – and found the unexpected as a result… Yet where better to end the project than at a celebration of the ninetieth anniversary of the first official airing of the BBC Shipping Forecast? It was, I reckoned, probably as close to visiting all the sea areas in one go as it’s possible to get. (Apart from listening to the Shipping Forecast itself, that is.) Charlie Connolly who wrote the wonderful travel guide Attention All Shipping, had a one man show on board the Cutty Sark recently. As he said himself, ‘I’m one man and I’ll be making a show of myself, so it’s probably appropriate’. 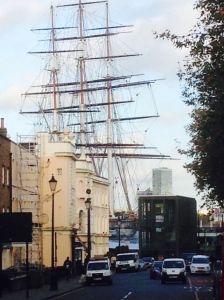 A state-of-the-art tea clipper from the days before steam ships, and now the nautical equivalent of a Grade I listed building, the Cutty Sark is in dry dock in Greenwich in south-east London. Greenwich has the atmosphere of an open-air maritime museum: a Grade I listed air hangs over the entire town, and the spidery masts of the Cutty Sark rise delicately above a genteel row of eye-wateringly pricey houses. It’s strange to see a boat butting up so close to buildings and cars in a city; it is a brighter, Georgian version of the Hitchcock film Marnie, in which a vast ship forms an abrupt and unsettling end to a red-bricked terrace. Time flies by here – literally, because outside the Royal Observatory nearby a long piece of brass set into the ground represents zero degrees longitude, so you can hop from east to west and back again in a trice. On a wet day, you don’t even have to change puddles.

To an audience of Shipping Forecast fans in the Cutty Sark’s tiny theatre space, Charlie Connolly’s tour began and ended in Greenwich and more than delivered on his promise of, ‘history, travel, stories, iffy jokes, a bar and an interval and everything.’

(And there I am, in the aforementioned interval). Now, it’s not that I was expecting Captains Birds Eye, Pugwash and Hook to be in the front row or anything, but I did look around the audience and assume that like me, they were all armchair enthusiasts; people who love the Forecast for its poetry, but don’t depend on it for their livelihood or welfare. Since I began this project, many people have asked me who still uses the Shipping Forecast these days? Who needs it, now that all the information you could possibly want is available online? It was one of the first questions I had for Craig Snell when I pulled up a chair at his desk last July. The BBC too has been asking this question: last year it sent out a questionnaire to members of the Royal Yachting Association, the national governing body for boating, enquiring how they get their information about the weather when they’re at sea. If the answer had come back ‘duh, the internet,’ would that have meant the death knell for the Forecast and its nighttime companion music? Radio 4 controller Denis Nowlan said the survey showed – phew! – the Forecast on Radio 4 longwave continues to be a primary or secondary source of marine safety information. An informal survey the BBC Feedback programme held at the Cornish fishing port Newlyn revealed that, although younger fishermen are less likely to use it as their go-to source, it’s because the longwave broadcast isn’t at the mercy of digital signals and technology that it’s still relied upon.

That the Shipping Forecast is still relevant for those using it for marine safety is good to know, yet an incident in May this year unintentionally highlighted its enduring popularity with us landlubbers. The 5.20am broadcast on Friday May 30th failed to air because of a technical whoopsie, and listener reactions ranged from, ‘I didn’t know whether I should leave the house or not,’ to ‘but if UK submarines don’t hear it, don’t they begin a nuclear attack?’ (That Royal Navy nuclear submarines commanders are required to leap into attack mode if they don’t hear the Shipping Forecast is a long-standing urban myth. It has been roundly poo-poohed by the Navy, though methinks they doth protest too much…)

One thing that has stuck with me over the last six months, but particularly when I went to York during my visit to Sea Areas Humber and Dogger is: how do we ever really know where we’re going, despite all the preparation? The Shipping Forecast is a guide; a prediction not a certainty. As Sir Cloudsely Shovell and the crew of the Cita (among many, many others) could tell us, we are human and we can so easily be wrong. And yet, for those of us who tune in late at night because we love the language rather than need the information, it isn’t a prediction at all. Viking, Cromarty, German Bight, Fastnet, Rockall, Malin… these form a lullaby that conjures up dreamlike, inky seas. Viking invasions and U-Boats. Long-dead pirates and islands battered by storms. For us, the Shipping Forecast becomes a promise of hope, and of a new day breaking.

Though my explorings and wanderings are over, in another way the project is beginning, because now I have the fun of playing with all this fact and trying to turn it into fiction. I’m ending The General Synopsis at Midnight by listening to today’s lunchtime broadcast. Showers are expected later today in my nearest area, Irish Sea, in case you’re wondering. Did Craig Snell write this one? Thanks to the Maeve Binchy Travel Award I am able to picture him sitting at his desk in front of a bank of screens, painstakingly making the world at sea safer and more knowable for the rest of us. At the words Northeast Fitzroy, Sole I’m back on St Agnes on the isles of Scilly chatting to a stranger about why a man would choose to be buried standing up; with Faeroes, Southeast Iceland I’m on a boat in the ninth century determined to find a land that supposedly doesn’t exist; with Lundy, Fastnet I’m staring up at the black tower of Ballycotton lighthouse…

With many thanks to:
Professor Margaret Kelleher, Dr Éilís Ní Dhuibhne, Niall McMonagle and James Ryan: the UCD Maeve Binchy Award committee.
John Gore Grimes and Captain Harry McClenahan of The Commissioners of Irish Lights.
Imelda Rogers and the UK Met Office, Exeter.
The Binchy family, and to Gordon Snell particularly for his kindness, support and enthusiasm.

Sea more / hear more:
Each of the 31 sea areas is explored in The General Synopsis at Midnight on this blog, and any interesting sources or references I came across are listed with each entry.

For other bits and bobs, I was on the Marian Finucane radio show on May 31st, and again on September 20th to talk about my stay on Fastnet.

And lastly… a piece I wrote for Sunday Miscellany on RTE Radio 1, broadcast on November 2nd 2014.

And finally, it’s time for Sailing By…

One reply on “‘Sailing By’ (and saying goodbye)”

I have loved every one of these. Sad to see it finish- but looking forward to the end result.
Thank you, Henri, x Joy