So there we were, back in the lovely Gutter Bookshop in Temple Bar on March 16th to send The Heart of Everything off on its travels… The speechifying was beautifully done by Ciara Considine (Hachette) and Margaret Kelleher (Professor of Anglo-Irish Literature and Drama, UCD). It’s an odd notion, when a book is finished and goes out into the world alone by itself. You spend so much time noodling away with the characters by yourself and then it becomes a thing, an object that – thankfully, delightfully – people want to, well, launch.

It’s available from the Gutter and other bookshops and online and is an Eason’s Book of the Month. In a recent review ‘A memorable take on the torture of memory loss’ in the Irish Times, Éilís Ní Dhuibhne said, “Henrietta has wit, imagination, and an understanding of human beings, which are the hallmark of the true novelist”, and Frank McGuinness has described it as “A wonderful, memorable book – a tour-de-force”. 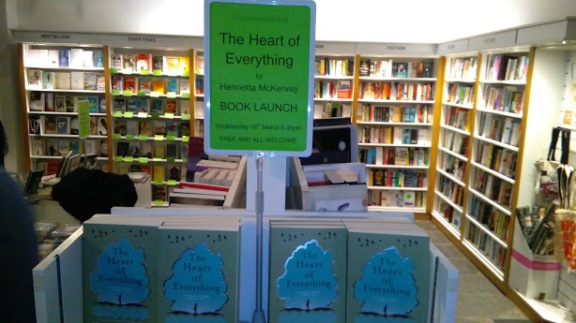