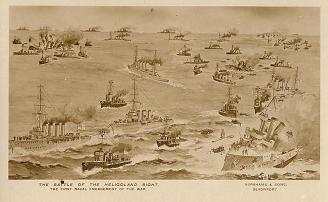 In 1955 the countries bordering the North Sea decided that sea area Heligoland should henceforth be called – drum roll, please – German Bight. It made sense, they reckoned, seeing as German Bight was already the name those on its other side used for this area. And so it was done. Exit stage left for the curiously elegant Heligoland, and enter German Bight, which sounds like a nasty rash.

As Heligoland did before it, sea area German Bight runs alongside the coast of Denmark. It goes from Dan Helder right at the tippety-top of the Hook of Holland to Esbjerg on the west Jutland coast. Following its path on a map I noticed a fantastically named selection of towns and areas: Borkum, Krummhorn, Wangerland, Norderney. (Norderney would be a good name for Fermanagh, I think, if for some reason Northern Ireland decided to hitch itself to the name-changing bandwagon.) There is a German island in this area called Sylt, described by travel writer Charlie Connolly in his brilliant book Attention All Shipping as a name that sounds ‘like someone accidentally swallowing a peach stone’. It’s according to the Danish tourist board so I’ll allow some bias, but West Jutland has some of the most beautiful nature in Denmark. Okay, the website concedes with an online shrug; fair enough. It’s not all tiny waves and the pitter-patter of smooth pebbles: the dramatic coastline of this, the ‘windswept west’ is shaped by the ‘uncompromising North Sea’.

What I hadn’t realised until I started The General Synopsis At Midnight is that Heligoland is a real place, not just a) the former shipping forecast sea area and b) that Massive Attack album from a few years back. It’s two real places in fact, as it refers to two islands. If only there had been a clue in the name. Formerly both a Danish and British colony and now German, Heligoland is a small archipelago of islands in the southeastern corner of the North Sea, three hours sailing time from Germany. Sorry, the uncompromising North Sea. The islands themselves aren’t immune from name changes: Heligoland was once known as Heyligeland or ‘holy land’. Imagine the confusion that must have caused in medieval travel agents.

Considering it is merely two small islands with a small population, Heligoland has had a traumatic life. It’s been British, Danish and German (‘Deutschland Uber Alles’ was written here). It’s been abandoned, nearly destroyed and rebuilt. It was the scene of a major naval battle of WWI – the First Battle of Heligoland Bight took place on August 28th 1914 – and a major air battle early on in WWII – yes, you’ve got it, the Battle of Heligoland Bight. The image up top is a postcard of the First Battle from the scrapbook of Leading Signalman George Smith, then on board HM Destroyer Forester. During a period of uninhabitation after WWII, the islands were used for bombing practice by the British. This included ‘the Big Bang’, a 6,700 tonne explosion – speaking of Massive Attacks – in 1947. Apparently the intention wasn’t to destroy the islands, and though I’m not yet a fully qualified munitions expert, it’s hard not to believe there wouldn’t have been an ‘ah, sure what harm’ attitude had the Bang been Big enough to take Heligoland out completely. As it was, the explosion shook the core of the bigger island to a depth of several miles down and changed its shape.

Heligoland is now German again (for now), yet one of its most significant naval stories has an Irish connection thanks to Admiral Thomas McNamara Russell. Born in County Clare in 1740, his career in the British Navy included active participation in the American Revolutionary War, the French Revolutionary War and the Napoleonic War. That’s a lot of war by anyone’s standards. His biggest success is said to be his taking possession of Heligoland after Denmark came into the Napoleonic War on the side of the French in 1809. The names of some of the ships under his command during what was a very long and distinguished career read like a roll call of British we’ll-show-Johnny-Foreigner attitude: The Vengeance, The Dictator, The Centurion. I’m not quite sure how his other ships the HMS Ferret and HMS Terrier fit in with this, and I like to picture the Admiral rolling up to the docks and rubbing his hands together in happy anticipation of an all-cutlasses-blaring adventure on the shiny new frigate Doomster, only to find the lads apologetically unfurling the sails on a nut-brown HMS Squirrel Nutkin instead.

Of course as name changes go, the smooth and tear-free ‘bye-bye Heligoland and hi-de-hi to German Bight’ pales into insignificance when compared with the switch from Finisterre to Fitzroy. Sea area Fitzroy’s coastline is relatively small considering its size. It touches land from Puerto de Vega in the Spanish Asturias around to a point just south of Porto in north-west Portugal. Follow Fitzroy’s invisible sea boundary straight north and up along the westerly line of the Plymouth and Lundy sea areas and you will eventually hit sand in County Wexford, at the point where our old friend Fastnet meets sea area Lundy. (Not far inland from here is a road with the curious name Lane Of Stones.)

In 2002 an international accord between the UK, France, Spain, Portugal and Morocco agreed to change the name of sea area Finisterre. Its name derived from the Spanish finis terre, ‘the end of the earth’. It was confusing, the Spanish argued, seeing as they already had an area of the same name themselves, and the waters in question bordered Spain, not the UK. Their pronouncement wasn’t followed with the Spanish version of na-na-na-na-na, but I bet they were thinking it. And so the Met Office firstly had to find a new name for Finisterre, and then agree how to pronounce it (FITZ-Roy won the day, beating off stiff competition from Fitz-ROY). Apart from those optimists who saw this as a glorious opportunity to make puns along the ‘God rest her Sole’ lines, people took its renaming rather badly. The BBC website on February 2nd 2002 wrote an obituary: RIP Finisterre, which began; ‘FINISTERRE shipping forecast sea area, a familiar friend taken away from us after a lifetime of service.’ The Liverpool Daily Post newspaper launched a campaign to try to save the name. The letterboxes of The Times and Telegraph were stuffed full with middle-England outrage. A woman from Tyneside who together with her sister had between them named their children Shannon, Tyne and Bailey, complained to the BBC R4 Today programme, ‘Fitzroy sounds more like a Doberman dog than a sea area.’

The westernmost peninsula of mainland Europe, Cape Finisterre (that’s a little bit of its coast in the photo) is the final destination for many pilgrims on the Santiago De Compostela, the Way of Saint James. (Familiar to David Lodge fans as the route Tubby Passmore takes in Therapy when he decides to follow his former sweetheart Maureen on her walking pilgrimage.) It was the Romans who came up with its name, obviously convinced that no way could be any more terre after this bit here. Finis. Its coast is known as the Costa da Morte, the Coast of Death.

The hypnotic, evocative beauty of the word Finisterre does make its substitution a tough one, but it’s hard to argue with a decision that celebrates Vice-Admiral Robert Fitzroy. A skilled seafarerer who also put in a spell as Governor of New Zealand, one of Fitzroy’s many claims to fame is that aged only 23 he captained the HMS Beagle on its expedition to Tierra del Fuego and the Southern Cone. On board too was a gentleman by the name of Charles Darwin, and a young hydrographer called Beaufort. I wonder what ever happened to them? Reputed to have a terrible temper, on the five-year voyage with Darwin, Fitzroy’s nickname was ‘hot coffee’. Having retired from travelling because of ill-health, in 1854 he was appointed Meteorological Statist to the Board of Trade, which thanks to his pioneering work became the Meteorological Office. Five years later, a particularly violent storm sank The Royal Charter with the loss of hundreds of lives. It was on its sixth journey from Australia to Liverpool. There’s a very moving contemporary report here, and a selection of retrieved artifacts are on display at the Merseyside Maritime Museum. Amidst concerns about the ever-increasing business of shipping lanes, he began to develop charts that would allow weather predictions to be made. To speed matters up, he established 24 weather stations around the UK. Information was sent from these stations to London using Morse Code. Not only was it his idea to publish forecasts in daily newspapers, the very term weather forecast was his. Impoverished thanks to the cost of his research, Vice-Admiral Robert Fitzroy died by suicide in 1865. He was only 59.

The names of the sea areas of the Shipping Forecast are derived from – among other things – sandbanks, estuaries, islets and towns. Fitzroy is the only one named for a person. I think it was well worth the switch from Finisterre, because it’s thanks to Vice-Admiral Robert Fitzroy that we have a shipping forecast to listen to at all.

—-
A postscript that’s more to do with changes of line-up than name, but still… Two years ago today Ireland beat the Faroe Islands 4-1 in the 2014 World Cup Qualifiers. Sea area Faeroes first appeared on the shipping forecast map in 1932 and has borders with sea areas Southeast Iceland, Hebrides, Bailey and Fair Isle. (You can read about my trip to sea area Fair Isle here.) A landlubber connection between Ireland and The Faroe Islands is former Republic of Ireland football manager, Brian Kerr. Between 1997 and 2005 he managed first the Republic of Ireland Under 20’s, and then our national team. He went on to manage the Faroe Islands’ team in 2009 and became so popular that his departure two years later didn’t go down at all well: then defender Alti Gregersen told RTE the squad were ‘willing to die’ for him. As the country crest suggests, these are people with strong opinions. Apart from five men who were signed to Danish or Icelandic teams, when he took over the job initially, the balance of his squad were part-time footballers.

In a newspaper interview he said: “We have four carpenters, at least six full-time students – one of them had to fly to Copenhagen and back for an exam this week – two policemen, an accountant, one fella works in a sports shop, two teachers, Andreas works in a bowling alley, and he’s doing a bit of carpentry as well. Simun is full-time in Iceland, Suni works in a fish factory, I think Frodi’s a builder, Jakup is a teacher but he’s on the town council as well, he’s like a TD. That’s kind of the run of it. The pool is quite limited, there’s no one at Milan we’ve missed out on. The Granny Rule isn’t much help either, the Faroese haven’t been huge at emigration.”

Emigration. Now there’s something the Irish, in common with many of the Shipping Forecast countries, have been good at.

(Images thanks to Wikipedia).