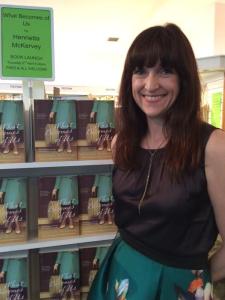 It might go the same way as the 1970s fashion for ties cut from the same fabric as the shirt underneath them but hey, it was worth a (completely coincidential, honestly) shot…

What Becomes Of Us got its first airing in front of a very full house in the Gutter Bookshop in Temple Bar on Thursday April 2nd. There was some top speechifying from Ivana Bacik and Ciara Considine, and a little bit of reading out loud by me. Many thanks to Bob at the Gutter for hosting such a great evening and to Ciara, Breda, Joanna and Susie from Hachette for all their work on the book’s behalf. 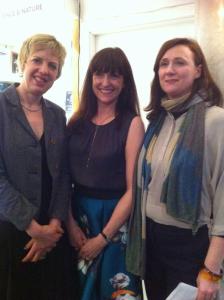 And here’s what people are saying about it…

It was reviewed by Louisa Cameron on Arena on RTE Radio 1 on April 1st (about 19 mins in on this link).

“A thoughtful, poignant and insightful novel … there’s a hint of Binchy in McKervey’s ability to tell a complex, entertaining story with intelligence and wit” (Irish Times)

“A beautifully written account of a time when women, still subjugated, were determined to fight for their rights. It’s also a story of friendship, neighbourliness, what family really means, and where it can be found … All of the characters are superbly drawn” (Irish Examiner)

(This shelfie is the before shot. I’m glad to report that the after shot was an empty display)

2 replies on “Co-ordinating book cover and outfit, anyone?”

Congratulations and I wish you every success. 😊

thanks! very kind of you.